Why I Got Nexplanon Removed: What To Expect After Removing The Implant

My Experience with Nexplanon

Birth control is important. And if you’re a girl, being on some form of birth control can lead to other benefits outside of not getting pregnant. Sorry boys, but you aren’t blessed with monthly periods like we are. Please continue to carry condoms though!

When I decided to switch from birth control pills to Nexplanon (a tiny birth control implant that is inserted into your arm and releases hormones to prevent pregnancy), I was 100% over taking a pill at the same time every single day. There would be days I would forget to take it and that just so happened to be when I was consistently having sex without a condom. Talk about the fear of getting pregnant.

I’ve explained why I decided to switch to Nexplanon on the podcast, but the decision to get it removed was actually a pretty easy one to make. With the pill, I had consistent periods and little to no acne, and after the full 3 years of having Nexplanon, I realized I was constantly spotting and experienced the same level of severe acne I had when I was a teenager. Both of those things combined were enough for me to call it quits with Nexplanon.

I just want to say that I love my new doctor here in Nashville! She didn’t pressure me into trying other options (like my previous doctor did…hence the Nexplanon), she didn’t judge me for not wanting to have kids in the near future, and most importantly, didn’t give a damn about my sex life. All my doctor cared about, was that I was making safe choices. Like wow, what a concept.

Now when you get Nexplanon inserted, they numb you up and then shoot the implant into your arm. The whole thing feels like getting a shot. After that’s over, you have to wear a compression bandage for 24 hours and avoid getting the area wet (showering with one arm is really the only challenge).

When getting it removed, there’s a little bit more to it. Because the rod can shift around over time, they have to pinpoint where it’s at and then cut it out of your arm. Lucky for me, my implant didn’t move around much. So after I was all numbed up and ready to go, they took a scalpel to my arm and pulled the little guy right out. My doctor was so funny about it and asked if I wanted to keep it. And to that, I said, “Nah I’m good, throw it away!” 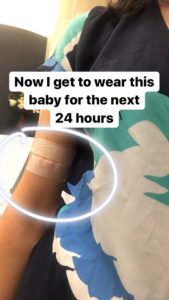 Removing Nexplanon didn’t hurt as much as I expected it to.

After, my arm was wrapped in a bandage and I was instructed to keep it on for 24 hours. I also had to avoid getting it wet. Easy!

It has been really easy getting back on the pill. Hopefully, over time, my acne will improve. I’m also really happy that I won’t have to worry about spotting at the most inconvenient times (cough, cough, in the bedroom). If you’re considering birth control options, talk to your doctor. There are pros and cons to every option out there. Nexplanon isn’t the worst birth control on the market, but for me, the acne and spotting were enough to not want to get it again.