Episode 30: What Do You Owe Someone After A Date?

After a date, do you have to kiss him? Go further? What does dinner get him? Sarah and Adam talk about reciprocity in dating and what you may or may not owe someone after a date. But that’s not all! Don’t miss out on the hypocritical judgment Sarah got from one Bumble match and the dumpster fire that happened with another. Adam, as usual, still needs to step up his game, but who knows what ridiculous story from his life he’ll have to share this time? 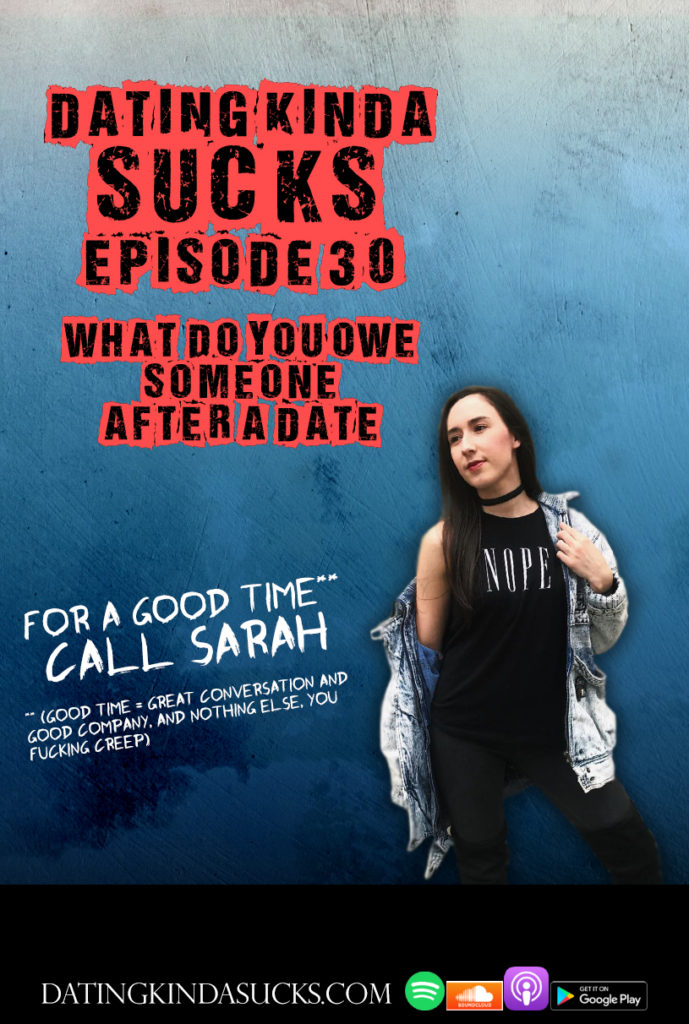 Host Thoughts on the Reciprocity In Dating

If you’re a guy and you plan on going on a date with me, there is no reason why you have to pay. Literally only pay for the date if you really WANT TO. It’s fine if you say “let’s just split it this time” or if you’re out at a bar switch who pays for rounds.

If a date is going really well and the guy steps out to go to the bathroom for a minute, I have no problem grabbing the waiter and paying for the check before he gets back. That move has worked on a couple of occasions.

The topic was almost an afterthought this week, as we focused on two men in Sarah’s life. One who turned out to still be hung up on his ex, but seems like a nice guy, and the other who seemed like a nice guy but turned out to be hypocritical and judgmental as fuck. And of course, he’s a Christian, according to his dating profile. So many fucking so-called Christians are out there who put their stock in hating and judging others and failing to understand the basic tenets of their faith on any level. As far as the topic is concerned, I’m glad we touched on it, but it should be a relatively simple concept. If you pay for dinner and drinks for a date, that doesn’t mean you’re owed anything. You get repaid with the other person’s presence during the date. That’s the extent of what she owes you. To think otherwise makes you a despicable piece of shit.